I’m spending a fair amount of time thinking about the physical Learning Commons space these days.  This has led to some great conversations and the beginning of a few visits to local schools that have adopted the Learning Commons model.  It seems that more and more school districts are liking what they hear from the Learning Commons camp and are putting their money where their mouths are in terms of funding renovations, technology upgrades and re-furnishing.  One such school is Johnston Heights Secondary in Surrey, BC.

The path toward a Learning Commons was very quick at this school.  Under the direction of a district initiative to support a number of transitions, Michelle Hall applied for grants to rebuild her space.  Hall has a Teacher Librarian background but has been a Home-Ec teacher at Johnston Heights for a number of years.  When the previous TL announced her retirement last year, Hall was eager to get back in to the Library.  She spent a good portion of her year, reading, visiting and writing grants to put together her vision of what the Learning Commons should be. The previous incarnation of the space held fast to the traditional model of the school library.  It was filled with shelves and filing cabinets.  There was an extensive set of filing cabinets housing a thorough collection of newspaper and magazine clippings.  Talking was “discouraged” and access to the library was by appointment with the librarian.  There are some wonderful floor to ceiling windows in the space that were blocked by filing cabinets and shelves. 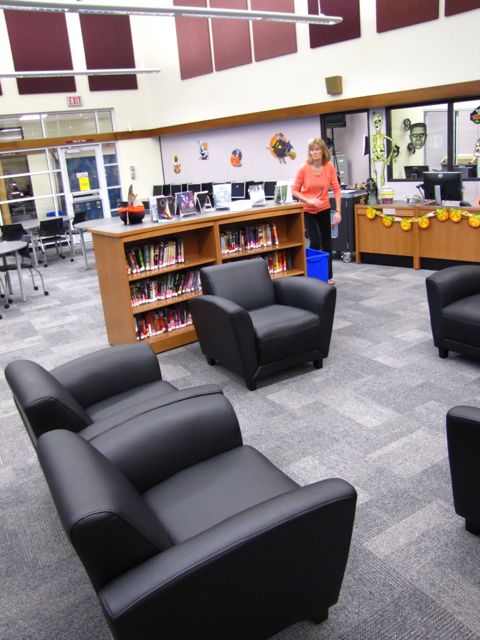 The new vision is much more open and flexible.  It is a welcoming space where students often remind adult supervisors that this is a Learning Commons, not a Library and we’re allowed to talk.  The space is often filled with students, some who are there to work, and others are there because it is a welcoming environment that encourages reading and collaboration.  The circulation desk, that once took a large portion of the centre of the space is now along the back wall of the room freeing up space for comfy chairs and, soon, a coffee table.  Graphic novels and YA lit are within arms reach of this area. 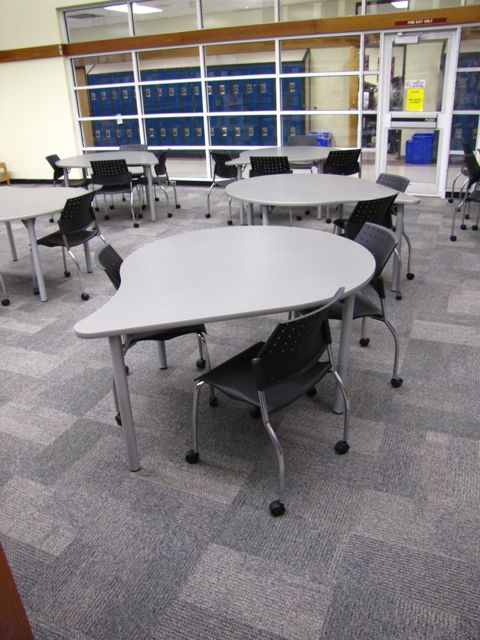 Tables are now light and interlock in a multitude of ways.  Chairs are on wheels.  While there are natural areas for these furnishings to default into, they can be reconfigured instantly for any number of uses.  There are two presentation areas being built in opposite corners of the room.  One seems to be a more traditional space with a projector and whiteboard along with seating for an audience.  The other is planned to be more of a large computer monitor and whiteboard pairing near a number of the computer stations.  The windows have been cleared so the space is now a visible hub of the school that is seen from the front doors and two parallel hallways running up the sides of the room.  The windows also allow for some indirect natural light to filter into the room. 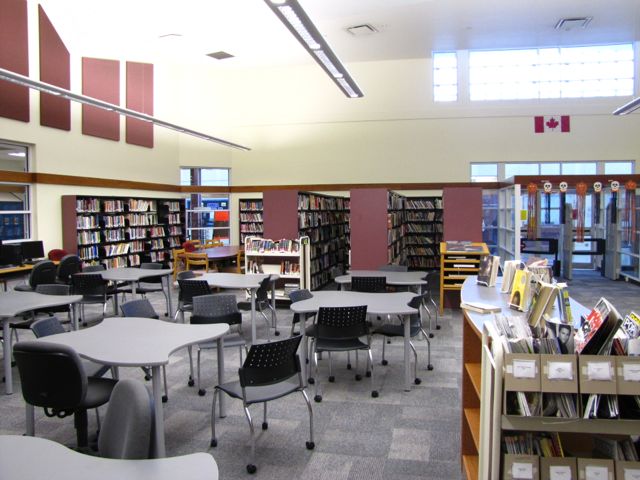 Books are still important in this space.  While there is a clear move toward digital resources and technologically enhanced manners of knowledge construction, there is still a recognition that there is a valued place for physical books.  The reference section has been significantly weeded and what remained has been integrated into the rest of the collection.  A number of the bookshelves were removed, but others have been kept.  Spaces have been created using the fixed shelving, and, where possible, mobile shelves have been used.

One of the issues of this spaces is common with the one that I work in.  That is that there is very little natural acoustic division.  It is very difficult for 2 presentations to occur simultaneously.  If a particularly energetic collaborative project is under way, it can be difficult for others to read quietly or cram for that last period test.  The shelves can help with this in this space as they act as dividers.  There are some adjacent rooms that offer opportunities for quiet work.  One is currently doubling as a media production lab with green screen and lighting.  Another is currently used by another department but is likely to become available in the near future.  As much as we encourage lively group work, it is also important to remember the needs of all users of the Learning Commons space and plan for quiet, individual use as well.

My take-aways from this visit relate to how much impact a physical design change can affect use and attitudes toward the space.  The descriptions of the silent, controlled environment that existed 6 months ago compared to what exists now are like day and night.  These descriptions did not just come from the TL but also from others who use the space.  There is a pride in the space that permeates the school.  When I signed in at the front desk I was told proudly that “we don’t have a library, we have a Learning Commons.”  While my school’s space is not as strict as what has been described in Johnston Height’s previous space, I do look forward to seeing and hearing the reaction to the new space when we enact the changes that we hope to.

Ideas that I want to pursue as I move forward based, in part, on this visit, include getting as much feedback from the community as possible as we build the ideas around the space.  While, if we were to use a Wikipedia analogy of if they build it, they will use it, doesn’t entirely translate here.  I’m not sure that I want a Grade 8 Architecture class actually building a space for public use!  But the more involved the users and current non-users are involved in influencing the design of the space, the more ownership they will feel and he more use they will get out of it.  The situation at Johnston Heights didn’t allow for much input and collaboration in the planning stages.  I wonder if things would have been done any differently had that process been able to happen.  I love that members of various departments got involved in the physical work of moving books and furniture to make room for the new.  I’m sure that there was more than one instance of “I didn’t know that we had that!” and a few ideas interjected along the way.  What a great way to get folks to feel a part of their learning space!

I’m also very conscious of the need for dedicated spaces for certain activities (media production lab, small group presentations, silent study).  As much as we want flexibility, there are certain things that need to be fixed to be able to function well.  A sound-proof room doesn’t usually work well if the walls are movable.  Living in an earthquake-prone zone, we have to take into consideration that some shelving needs to be bolted down or attached to a wall.  Often the need for flexibility needs to be balanced with other considerations that demand that we fix things in place.  This is where we have to be creative in our use of space and use what needs to be fixed in prudent ways, and find creative ways to stay as flexible as possible.

I’m really appreciative of the time that Michelle Hall spent with me at Johnston Heights today.  She has a lot of great things going on and it is great to spend some time exploring ideas that are important to us both.  I would encourage you to explore her blog and Flickr stream to see the transition in action.  The blog is also becoming a central focal point for her programme in general and it is great to see how the students are interacting with the new way of doing things.  Thank You, Michelle!

Photos are either mine or from the Johnston Heights High School Learning Commons Flickr Stream.