Regular readers will know that I’ve been thinking a lot about 3D printing in the context of the school learning commons for some time.  Well, ours got delivered yesterday and I have printed my first objects today.  In my research however, I haven’t found a lot of material on rookie 3D printing so I thought I’d share my experiences here.  I won’t get into why I think that 3D printing has a place in the school learning commons as I’ve talked about this here, but I will talk about the nuts and bolts (sometimes literally) of my experience with 3D printing.

To give some background, I decided to go with the Makerbot Replicator 2.  This was as much a choice of a company as it was for the printer itself.  So much of the information that I found online was from Makerbot.  I don’t know how much of that is great marketing and how much relates to that fact they are simply the industry leader.  I do know that when I called them to ask some specific questions before placing the order, I felt that the sales rep I spoke with was honest and gave me as much time as I needed.  I didn’t feel pressured or snowed in any way.  Not that I’ve had to yet, but I feel that I could call the rep again, post-sale, and he would give me the same kind of assistance and time.  I also was impressed with their educator community and the material that I found there was valuable in putting my proposal together for my admin. 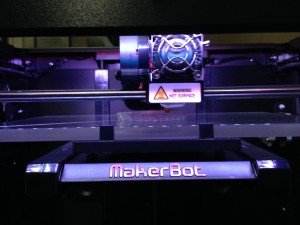 I did look at other makes and models but settled on the Makerbot Replicator 2 for two big reasons.  I needed something that will hardy and easy to use.  While I expect that the printer will be operated exclusively by staff (mostly in order to manage the print cue), I did want to make sure that it was as problem-free as possible.  I don’t want to spend all my time on trouble-shooting and many of the printers in this market are aimed at hobbyists who are as much into tinkering with printers as they are into printing things.  I also need the printer to live in an office space and the Replicator 2 prints with a PLA filament.  The PLA is low-odour and non-toxic.  The material itself is an environmentally-friendly bioplastic.

So, the package arrived.  I resisted opening the box until I had the time and space to unpack it properly.  I had seen a couple of videos online that were ranting about packing and shipping issues.  I wanted to make sure that the unpacking and setup was done carefully.  I even read the manual before I took the first piece out of the box!  Certainly not something in my normal pattern.  The set up is fairly well documented both in print and in a series of online videos.  The only the thing that I was unclear about was which side of the build plate needed to be face up.  But that got cleared up in the videos by watching carefully.  One nice surprise was that there was a spool of filament in the box with the printer.  I’d bought some additional filament to keep me going, but it is nice to have some to play with and get to learn the ropes. 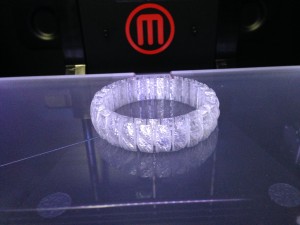 Once the few pieces are assembled and zip-ties are removed, the only thing that needs to be done is the leveling of the build plate.  This process makes sure that the surface the your objects get printed on is parallel with the plane that the extruder (think “ink jet”) moves on.  While this process is crucial to successful printing and I felt a little apprehensive about screwing it up, Makerbot has made it easy and triple checks your work.  Once this is done, it’s time to print!

The print files can be run from an SD card or directly from the Makerware software on your computer (attached to the printer via USB).  I started with a few of the demo projects: a semi-flexible bracelet, a working nut and bolt, and short 50-link chain.  The only issue that I ran into was with the nut and bolt that I had serious issues removing from the build plate.  The printing process is one of layering fine layers of melted filament to build up the finished product.  The nut and bolt have a fairly large flat service on the base that is in contact with the build plate.  When the plastic cooled, every project will stick a little to the build plate, but the increased surface area of this particular project made it hard to get off.  The printer comes with sheets of blue masking tape material that I have since put on the build plate and am hoping that this reduces issues with sticking. 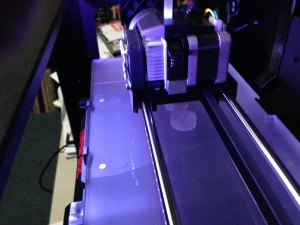 With the three demo designs, I noticed a few things that might be of interest to folks who would be putting a 3D printer to the same applications as I.  First, the smell is almost non-existent.  Any fears I had about this have pretty much disappeared.  The extruder nozzle reaches a temperature of 230 degrees Celsius.  It would be important to keep the printer out of the reach of young children’s curious fingers.  The printer itself is pretty open and the print surface is visible and reachable from front and both sides.  I anticipate keeping the printer on the other side of a window in an office space.  This will keep the printer visible raising interest and use but keep the risk of injury low.  Print times were actually faster than I thought.  3D printing takes time, but these objects clocked in between 15 and 30 minutes. 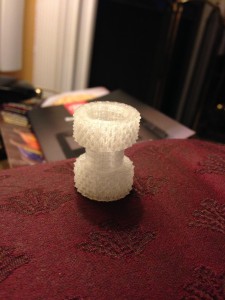 The next step was to start to try more complex designs.  The planned approach is the following.  Makerbot has an open design exchange called Thingverse.  I found a shelf-marker that is customizable.  I took this design and made it my own.  I had the opportunity to change the word printed, font, text size and space between letters.  This design took 70 minutes.  The next project is currently printing and it is a model of a caffeine molecule that I found in the Sketchup 3D model library.  Sketchup is a 3D design tool that used to be owned by Google.  There is still a free version and the educational license for the pro version is $15/year or less.  What I’m not sure of at this point is if the pro version of the program is required for 3D printing or not.  With the demo of the pro version, I was able to take the molecule model, re-size it and send it to Makerware where the printing file was created.  OOPS! I just went to see if I could report on the estimated build time for this project and found it in a state of disarray.  I had one atom of the model nicely formed surrounded by a fair amount of plastic strands.  Now that I think it through, there wasn’t much on this model that was rooted on the build plate.  I’ll have to look at ways of doing this.  I know that there are ways of building supports for suspended structures.  Yeah!  First major learning project!

I hope that this blog post is useful.  Please add to the discussion if you have questions or if you have experience in 3d printing and can offer device!