Making as the Motivator 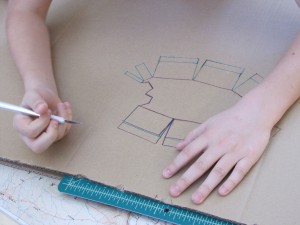 We’ve been having a great time this week at my school.  It is Arts Week and we have had some greate speakers in to work with and speak to our kids.  Shea Hembrey has been particularly motivating to us all in the Learning Commons as the inspiration for and a prodding force in our week-long Solvers’ Workshop.  If you haven’t seen Shea’s TED Talk, you need to…

Without going into too much detail about Shea and his background, he is an artist that has done significant work dealing with personas and introduced me to the idea of invented cultures (or at least brought the idea up at the right time for me to connect it with our Arts Week offerings.)  He invented an artist who’s significant work was been that of inventing cultures and documenting them.  In the real exhibition, the imaginary artist presented a collection of photos and other documentation of a fictitious culture that was based around the worship of the uvula.  Yes… the uvula.

I thought that it would be cool for our students to explore culture by inventing their own so all this week, we have had students, primarily in their classes but some as individuals, come to the Learning Commons and invent a culture and then document that culture by making an artefact of that culture.  I present it to the students as, “What object would an archaeologist discover, many years after the culture has waned, that would tell them important facts about your invented culture?”

This has been an exciting journey.  I will admit that I was pretty nervous about it at the beginning of the week.  I thought that the students might think that it was too immature an activity or be paralyzed by such an open-ended task.  I thought that there might be no buy-in from teachers – after all, it is getting close to the end of the school year and there is curriculum to finish and exams to prepare for.  Why would they waste precious time playing in the Learning Commons?  I was also concerned that, no matter how many tools and materials I had, I would not have enough, or wouldn’t have what was needed.

While I’m sure that there is an element of truth to all of these concerns, the Solvers Workshop has been gaining momentum throughout the week.  I have spent hours sitting and watching and talking to students about their cultures.  I’ve learned about societies where fossils are both the icon of worship and the currency.  I’ve learned about a world where a peace loving and a war mongering culture live in a tenuous balance, unable to survive without each other.  Another society has escaped from the land to live in the mid-Atlantic due to excessive warring.  The depth of these and so many other invented cultures has left me thinking that this has been an invaluable exercise as students think through the implications of certain unique elements of their cultures and explore how geography, beliefs, or commerce can affect so many aspects of culture.

Now, I will admit that most of the objects that have been created will never find a place at MOMA.  The students simply don’t have enough time, most are not regular makers thus their skills are not in the realm of elevated craftsmanship, nor are the supplies or tools really conducive to amazing art.  The true value to this experiment is in the thinking, the problem solving, and the story-telling.  I have wondered if we should simply take the making out of the picture.  But I think that the making is what is driving the thinking.  In some cases, the students dive into making before they’ve really given their culture much thought.  It is the artefact that tells them about their culture.  In most cases, it is the making that motivates the thinking prior to the construction of the actual piece.  They have to work through a significant back story to be able to build something that will tell that story.  Either way, the making, while somewhat inconsequential, is the key to the process.  It is the destination that ensures the need for the path.

We have 2 days left in this experiment and I am currently collecting feedback from the students in order to discover where they’ve seen the benefit and what improvements we need to make if we are to repeat this event or something similar in the future.  We have already received the feedback that some would love to have a space all year ’round that they can come and make.  As I launch into a research project on the theme of “Boys as Makers,” boy does that suggestion excite me!  As always, I would love to hear thoughts on this process.  Have you done something similar at your school or library?  Do you see holes that could be filled?  I’m thankful for any discussion, any time!  🙂