What a week!  I’ll write about my fantastic trip to Boston with members of our Socials Department, my Librarian colleague from our Jr School and Leslie Maniotes in another post, but while I was away, the Social Studies class that I had written about previously was working hard in their Create and Share phases.  When I returned, we moved into the Evaluate phase.

Let me preface the Evaluate discussion with a comment about how poorly we had implemented the Guided Inquiry (GI) framework with this unit.  Our initial motivation was that we had a unit that we had done for two years that had worked well, but we needed to shake things up.  I was reading the Guided Inquiry books and talking to Leslie in anticipation of the aforementioned trip to Boston.  I said to my partner in crime in this unit, “Let’s try Guided Inquiry!” and explained why I wanted to get my hands dirty and understand the model more deeply.  We had 8 classes and there are 8 phases to GI, so it made perfect sense.

In reality, GI does not work well with only one period per phase.  There are certain phases that simply need more room to breath and students need the opportunity to work, to a point, at their own pace.  We ended up extending the unit and using a progress mark for the second term reports.  We also needed a more consistent student:teacher ratio.  GI talks of Learning Teams of at least three teachers.  At best, we had two, and for a number of classes, for good reason, we were down to one.  There were many times where I felt frustrated by not being able to give all of the students the individual attention they needed.  And, as we were muddling through the process for the first time, there are many activities that we felt like we were flying by the seat of our pants and would do differently with our new level of experience.

But we’re talking about Thursday’s Evaluation session.  I have to say that I’ve never been part of such a positive, open and honest reflection with students before.  We set up the Evaluation with an extension of the Share session.  The students had all published their assignments to their blogs and we gave them time in class to read and comment on at least three of each others posts.  We introduced a framework for our ensuing discussion to keep in the back of their minds as they read and wrote. 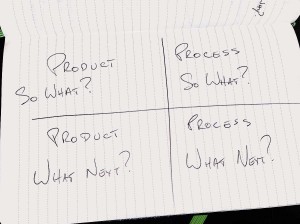 We defined product as the basic curricular goals of the unit.  For them, this was related to Canadian identity and how immigration has related to that identity over the course of our history.  The process ended up being more about GI itself and how we implemented it.  Once they’d had enough time to read, we got into a large group (full Inquiry Community) and had a Harkness inspired discussion.  We gave very loose prompts, essentially pointing them to one of the four quadrants in our chart, and let them take control of the discussion.

To be honest, we ended up spending the short time we had on the top half of the graph and didn’t really get to “What Next?”  But the “So What?” discussion was brilliant!  Here are some of the ideas that came out of that discussion:

Both the teacher and I are looking forward to how we all respond to the next GI unit.  I know that we will have more ideas on how to structure and pace each phase of Inquiry.  The students will also be able to predict the phases better and respond appropriately.  I hope that we can make better use of Inquiry Journals and Logs and structure the Identify process better.