Maker Club – Up and Running 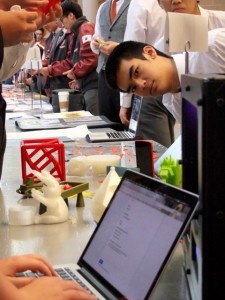 The great experiment has begun.  Not sure where it will go and what success will look like at this point, but that’s half the adventure!  We officially have a Maker Club at St. George’s.  We’ve been going for almost a month and the biggest challenge for me has been in keeping up with the print queue.  Nearly 50 active participants can create a torrent of design ideas.  Nice problem to have!

We have representatives from every grade who meet once each week.  We’ve started by focusing our efforts around our 3D printer.  I’m really hoping that this doesn’t remain a 3D printer club, but given the attraction of the students to the printer and the ease with which they can get started, it is a good place to start.  We’ve started with Tinkercad, an online 3D design tool that is really easy to learn and get results quickly.  The students have found the demo video and online tutorial projects more than enough to get them started.  We’ve seen a number of projects roll off the printer that have been designed in Tinkercad including the robot/mech below (note that the holder of the mech is not it’s designer, but perhaps it’s biggest fan and a prolific user of Tinkercad in his own right!) 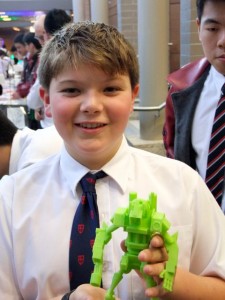 When the boys find Tinkercad limiting, which can happen fairly quickly, they’ve been moving on to Autodesk’s 123D Design, and then the really advanced boys are moving up to Autodesk’s Fusion.  Both of these programs are downloadable and free (Fusion being available to students and educators under a free license). The nice thing about this progression is that all products are produced by the same company, so the feel of each is similar enough to allow for easy adoption of the more advanced tools.  They are also all object focused in that one can start with a 3D shape and then work with it to create the end result that they are looking for.  While these also allow for 2D sketching as well, in order to draw free-form shapes that can then be extruded to create 3D objects or to draw 2D images on surfaces of 3D objects, the default function is in 3D, making the production of printable objects much easier.

Some of the students prefer to work in other programs like Blender or SketchUp (both also free.)  I’m not personally comfortable in Blender, so I can’t really comment on how well it works for the task, but SketchUp has presented some issues for us.  The first problem is the formats of files exported from SketchUp.  To create a sliced file (the file that the 3D printer uses to actually produce to object), we need to convert the image into an .stl file.  SketchUp does not do this without the addition of a third-party plugin.  This is easy to find and install, so problems here are temporary and easily fixed.  The bigger issue is that SketchUp seems to focus on the use of 2D faces.  It is very easy to draw faces that intersect to create the impression of a solid object.  Imagine connecting drawings of six squares together to form a cube.  The problem is, that the squares themselves have no depth.  So we see a cube, but can’t see that it is hollow and have the impression that at least the sides are there but we don’t recognize that the depth of each square is 0.  When we go to translate that object to a printable file, it doesn’t really exist and whatever the conversions between file formats do as we go from design file to the final final file format that the printer will use, errors start occurring causing an unprintable file.  While there are solutions, this level of complexity can be off-putting to beginners to 3D printing.

What has been fun to watch is the progression in complexity of designs as they get comfortable with their new skills.  We’re going to be looking at extending these ideas to perhaps build a geodesic dome and/or large scale sculptures.  We’ve been inspired by the recent Lexus cardboard car video.  To do this, we will be taking our 3D design skills and creating the physical models through the use of other materials and, consequently, other building techniques…