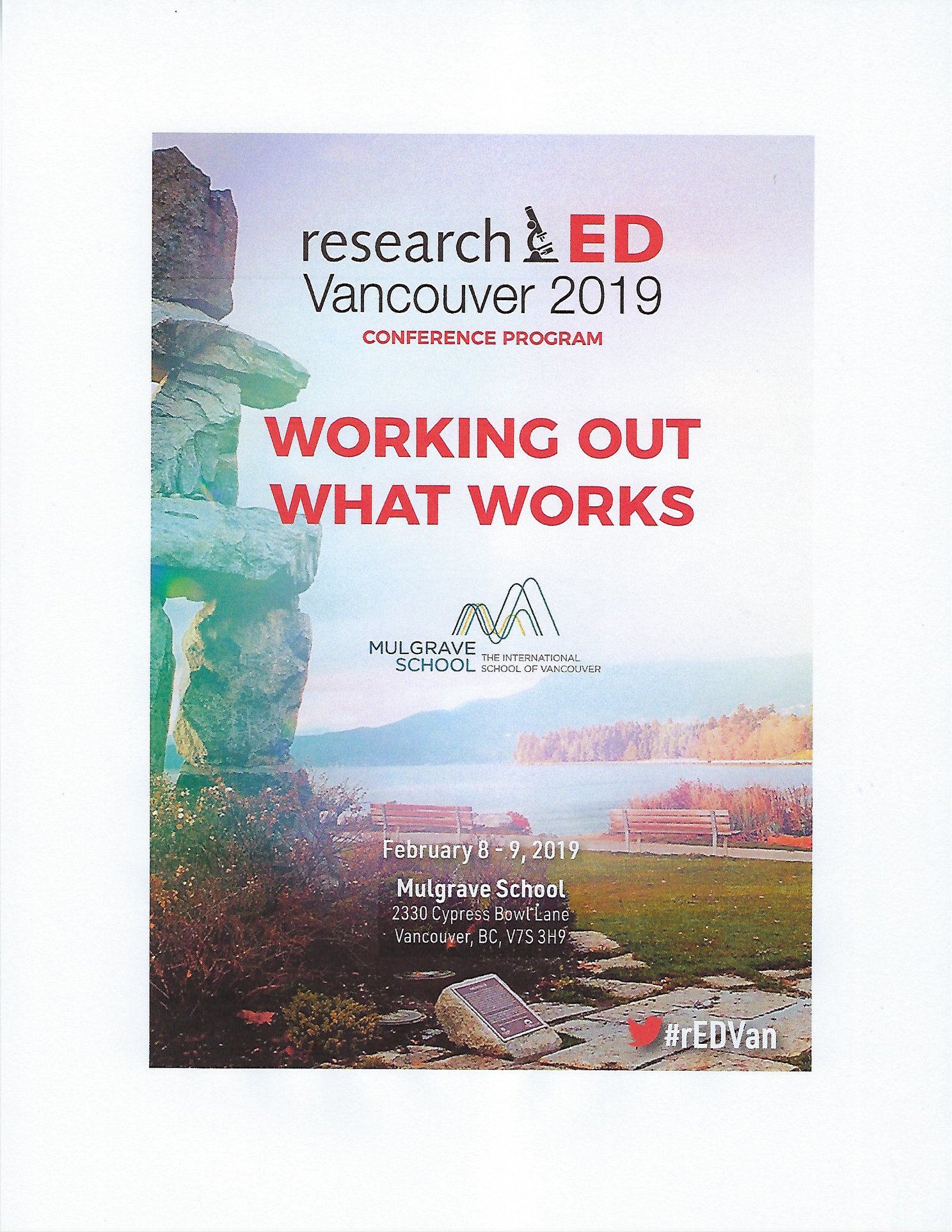 I had the opportunity last weekend (Feb 8/9) to present at a conference that I’d not had any experience with before. Someone had suggested that I present on research that I’d four years ago looking at making in the academic classroom. I looked up the organization, ResearchED and found that this was organization who’s mission resonated deeply with me. This is a group that was founded in the UK in response to the fact that far too many teachers jumped on the latest trend in education with little concern for what the research basis for said trend was. This makes sense to me. We owe it to our students to be skeptical of the latest trends and adopt practices that are proven to be effective. The comparison was made with medicine in that you would not want your doctor to prescribe you a medication based on industry promotion or the fact that it’s new and seems to work. You want to know that at least the doctor is fully aware of the evidence that that medicine works and that the side-effects aren’t more harmful than the condition that is being treated. This is simple evidence-based practice.

I recognize that I am guilty of adopting practices at times that aren’t well researched. This conference gave me cause to stop, reflect, and re-examine. This is a very good thing and I’m appreciative of the opportunity to have done this. I also appreciate that, at least on the surface, the people at the conference were very much about being critical of practice but not necessarily being critical of specific practices or people (although a few ideas and those that espouse them did take a hit.) I felt that if I were to come in spouting off about some outlandish pedagogy and could support that practice with solid research, people would listen and not simply laugh me out of town. In a world that seems to be increasingly about forming camps and believing what is popular in your camp, this was refreshing. Having said this, I did have two issues with ResearchED and these issue seem to be resonating further with online, post-conference discussion.

There seems to be a group of those that are connected with ResearchED (delegates and/or organizers) that tend to discount the new in favour of the traditional. There is logic in this given that the traditional has had more time to develop the evidence to support it. This fact gives rise to two essential problems. First, if the new is being rejected in principal, this approach is no better than those who put a blanket rejection on the old ways. I’m reminded of a pair of librarians (who matched the stereotype in every way possible barring the fact that they had not brought their cats with them) I walked out of a Nicholas Carr talk on his book The Shallows a number of years ago. I heard, “I told you, Betty! All technology is bad!” And I feel that they ran home to throw out their digital alarm clocks. We can’t pass judgement on the new in a wholesale manner in the same way that we can’t reject the old in the same way. I think that the mission of ResearchED is to be critical of all practices and ideas surrounding education so that one can adopt those ideas that are based in evidence. But I think that there may be some individuals attached to ResearchED who use this mission to justify a more traditional approach in a world where tradition seems to be being rejected.

The second issue with discounting the new is that the new needs time to develop its evidence. I appreciated that my presentation proposal wasn’t rejected based on the fact that it was looking at hands-on, experiential learning. While I did not get many people attending my session, I was supported in being able to present my ideas. These ideas were based on an albeit small research project that I undertook to dig deeper into the effects of this kind of approach in an academic classroom. The wholesale rejection of the new will never allow the evidence to build around ideas that need to be supported (or tested and rejected). We can’t simply say that if there is no evidence, we should not at least test an idea. If there is no evidence for a practice, then it has to be treated with skepticism. It has to be implemented in a way that will not harm students and evidence needs to be gathered and interrogated so that we and others may learn, but we have to test these ideas out and not simply rejected because it hasn’t been done before. If there is no evidence to support or refute a practice, then we need to create some!

I love the mission of ResearchED and I hope that they are back in Vancouver soon. There is nothing more important than being critical of one’s own practice. There is nothing easier to let go than the constant criticism of one’s own practice. It takes time and effort and schools need to continue to find ways to encourage and give time to their faculties to engage in that self-criticism. I simply hope that my experiences with ResearchED are based around genuine criticism of all educational practice without unjustified bias toward certain ideas and practices.